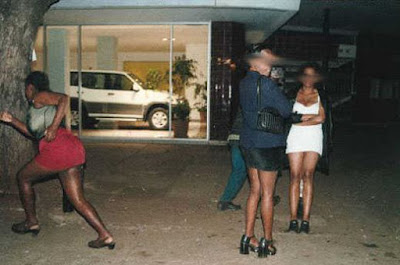 Addressing journalists after the raid which lasted for about four hours, Ngaji said the hotel had been turned into a brothel for commercial sex workers in Calabar.He added that the brothel had been used for criminal activities, selling of drugs and a hideout for criminals in the area.
According to him, the office of the State Security Adviser, in collaboration with security agents in the state, is working to ensure that criminals and prostitutes are shown the way out of the state.

“In collaboration with the office of the Area Command in Calabar, we used 11 trucks in conveying the girls and men to the Command.

“Each time you pass here at night, you find under-aged girls of about 13 and 14 years standing by and waiting for men. This place has become an area of concern to the state and Cross Riverians.

“This place has become a Sodom and Gomorrah in Cross River and the raid was carried out to stop prostitution and criminality in the state. All the girls that were caught here are prostitutes and some of them were caught in compromising positions.

“There is no law that legalizes prostitution in Nigeria. The girls will be tried in court and we will ensure that they are returned back to their respective states.”He advised teenage girls to take their studies seriously and engage themselves in meaningful activities, rather than choosing the path of prostitution as a means of livelihood