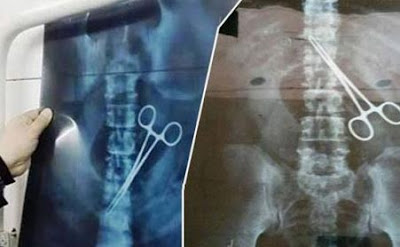 An unidentified Nigerian Muslim man arriving in Saudi Arabia for the annual Haj (pilgrimage) next week got the shock of his life when he was told by immigration service that there was a big scissors inside his belly.

According to Saudi daily 'Al Wata'n, the scissors was discovered when the Nigerian pilgrim walked  through the metal detecting machine at the airport in the Western Red Sea port of Jeddah.

The metal inside him caused the metal detecting metal to bleep, causing the police officers to call him aside. After all metal objects on him such as wristwatch and belt were taken off him, the machine still bleeped when he passed through it.

"He was taken for a scan at the hospital and the big surprise was that it showed there is a big scissors inside his abdomen. When he was told about it, the pilgrim got a shock. He said that he underwent  a surgery nearly 15 years ago but never had any pain,” an airport staff said.