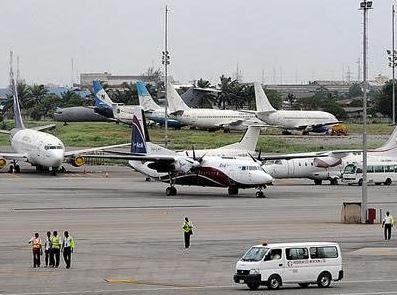 A 25-year-old man who attempted to hide under the tyre carriage of a Medview aircraft on a domestic flight was apprehended yesterday at the Murtala Muhammed Airport Terminal 2 (MMA2) in Lagos.

He was found by the pilot during his final check on the plane before its departure to Accra, Ghana.

Airport workers hinted that he succeeded in gaining access into the tyre compartment of the aircraft which was ready for taxing on the Tarmac.

He hid himself at the tyre compartment in the under carriage of the aircraft .A source hinted that final inspection round the plane by the pilot drew his attention to some strange movements and object inside the tyre compartment.
The man was handed over to the police at the domestic airport where he confessed he has nursed the ambition of carry out the act for two weeks and had been holed up around the airport while perfecting his plan.

The stowaway was said to have confessed that he did what he did out of desperation to leave the country for another in the quest for greener pasture.

When asked how he found his way into the tyre compartment of the aircraft, he declared that he jumped through the fence that demarcated the VIP Lounge section of the airport from the tarmac where the plane was waiting for clearance for takeoff.

He has been handed over to Criminal Investigation Department (CID) for further questioning.