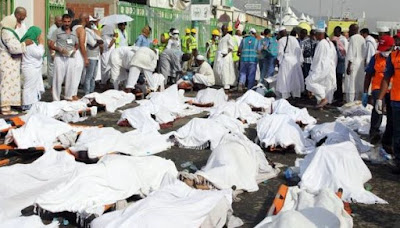 Taraba State Muslim Pilgrims Welfare Board has confirmed the death of the state’s Amirul Hajj for the 2015 pilgrimage, Abbas Ibrahim, the first class traditional ruler of Zing.

The chairman of the board, Hamman-Adama Tukur, confirmed the incident to the News Agency of Nigeria (NAN).

Mr. Tukur explained that the emir died on Thursday during a stampede that claimed the lives of more than 700 pilgrims.
Mr. Tukur said the body of the late traditional ruler had been recovered and buried in Mecca on Friday.

Meanwhile, the Zing Traditional Council has also confirmed that the emir died along with two of his four wives during the stampede.The ate emir was aged 62 and had been on the throne for 19 years.

He left behind, two wives and 13 children.