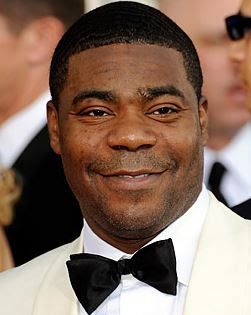 Comedian Tracy Morgan has reached a $90million settlement with Walmart following last year's horror crash that left him with severe head trauma.
This was revealed by fellow funnyman Damon Wayans who made the revelation while appearing on the radio show The Breakfast Club.

Wayans blurted out the figure while discussing the challenges some comedians face staying relevant to their audiences when they become wealthy.He said

There is a certain point as a comedian you have to be everyman... like, Tracy Morgan right now got $90million, so when he gets on stage, people got 90million things on their mind besides his comedy,'
In June 2014, Morgan was in a car crash in which a Walmart tractor-trailer slammed into his limousine
He then joked that learning of Morgan's windfall, some people might think to themselves: 'I wish that a Walmart truck would hit me.'

Morgan's camp on Friday rushed to dismiss the settlement claims as nothing more than idle gossip.

The comic's representative told TMZ that the terms of the settlement with Walmart are confidential, and that he 'has had no contact with Mr Wayans since before the accident, so there is no way he would be able to know this and thus is false'.