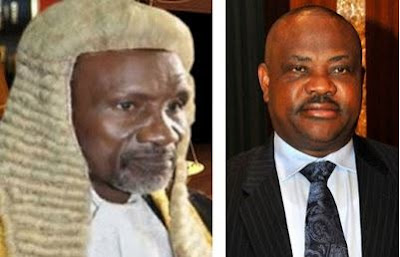 Justice Mu’azu Pindiga, chairman of the Rivers State governorship election tribunal, was removed after a group of investigators from the Department of State Security discovered that the judge had accepted a bribe of N200m from Governor Nyesom Wike, defendant in an electoral case before the tribunal.

SR sources within the DSS said their agents confronted the judge as well as the President of the Court of Appeal, Justice Zainab Bulkachuwa, with evidence of the bribe.

Justice Bulkachuwa was shocked and had no choice but to sack the tribunal chairman...


Justice Mohammed Ambrosa was then asked to replace the compromised Justice Pindiga, as the President of the Court of Appeal said there was no point swearing in a new judge.

Lawyers representing clients whose petitions were before the electoral tribunal told SR that they welcomed the firing of Justice Pindiga.

“Apart from the fact that he has been exposed for being corrupt, he has not demonstrated any knowledge of electoral matters,” one of the lawyers said. “I can tell you that a number of lawyers who have appeared before him have found him wanting when it comes to issues pertaining to the electoral laws of this country,” he added.

Another lawyer echoed the sentiment. “We had protested to the President of Court of Appeal to replace the judge. He was a poor judge,” he said.

After learning about the replacement of Justice Pindiga, Governor Wike’s lawyers launched a feeble protest, criticizing the reconstitution of the tribunal. However, their protest was silenced when they were told that the governor’s bribe to the removed judge had been exposed.

Governor Wike had made at least two attempts to see the Chief Justice of Nigeria to seek the CJN’s help to influence the outcome of the tribunal, but the nation’s top judge declined to meet with the governor, citing his fear of President Muhammadu Buhari.

SR learned that Wike’s lawyers facilitated the collection of the N200m by the ousted tribunal chairman.