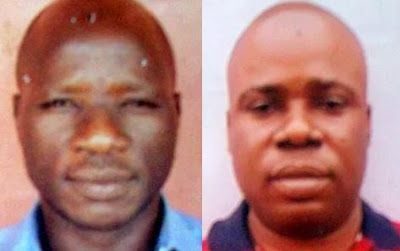 Two officials of the National Drug Law Enforcement ‎Agency, NDLEA, have been declared wanted after absconding with narcotics last month.

Daniel Goska, ‎a Superintendent of Narcotics, and Ndubuisi Ughor, a Chief Narcotic Agent, disappeared from their duty posts after a drug suspect, Dayson-Eddie Ifeanyichukwu, was nabbed with 74.4 kilogrammes of banned drugs at the Akanu Ibiam International Airport, Enugu.

Mr. Ifeanyichukwu and three other suspects had been arrested by the anti-narcotics agency for unlawful exportation of the banned drugs.
The officers were last seen on duty at the Enugu Airport on August 7, the NDLEA said in a statement on Monday.

Premium Times reports that, Ahmadu Giade, NDLEA’s chairman, said any staff indicted under the law would be treated equally.

“The agency has taken necessary steps by stopping the salaries of the officers and declaring them wanted.

The NDLEA chairman called on members of the public ‎with useful information about their whereabouts to report to the nearest office.