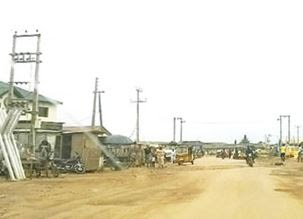 Tragedy struck on Monday on Ishawo Road, Ikorodu, Lagos State, after some Ijaw youths, suspected to be pipeline vandals, opened fire on policemen in the area, killing four.

PUNCH Metro learnt that while three of the deceased were attached to the Owutu Police Division, one was from the Special Anti-Robbery Squad.Residents said the Ijaw youths took away the corpses of three of their victims.

Our correspondent observed during a visit to the area that there was apprehension in the community, while there were still bloodstains at the scene of the shooting.

A resident told our correspondent petrol was generally referred to as ‘water’, or ‘pure water’.

“We started hearing gunshots in the evening of Sunday. But it was between 3am and 4am on Monday that the gunshots intensified.

“We did not know what transpired between the ‘pure water’ sellers and the police, who have a patrol team by the roadside, until we woke up to see blood and later learnt that some policemen had been killed.”

Another member of the community explained that the killing was due to a disagreement between the policemen and the suspected vandals.

He said the vandals had paid the policemen some money after they intercepted four tankers of fuel in the community, but the SARS officers later came to make a separate demand.

“After the policemen from Owutu had been settled, SARS operatives came and said they had not been given their own share.

“The vandals asked them to meet their colleagues who had already been paid. They told the SARS men that they were not making much money from the business and that their demand was excessive.

“The SARS officers became angry and seized the tankers.”

PUNCH Metro learnt from a police source that the vandals left the trucks and returned to their commander in the creek.

The source said the commander, one OC, was the one coordinating the vandals in the creek.

“After SARS officials took over their trucks, they threatened to take them to their station if their demands were not met. The vandals went to mobilise themselves and returned with their boss, OC.

“OC then ordered them to open fire on the policemen and that was how three of them died.”

The source identified the deceased cops attached to the Owutu division as Inspector Yerima and Corporal Adakuro, adding that one Sergeant Endurance was rescued from the scene and taken to the Ikorodu General Hospital, from where he was referred to the Lagos Island General Hospital.

He said the station immediately received a call from two other officers, who escaped unhurt, warning of the possibility of an attack on the station.

A source told PUNCH Metro that one of the slain cops, Adakuro, was of Ijaw descent, and knew many of the vandals.

It was learnt that the police corporal had called the bluff of the vandals, which aggravated the matter.

His handset, which had the phone numbers of the vandals, was said to have been taken away after the incident.

It was gathered that the Divisional Police Officer of the Owutu station had reported the case at the command headquarters.The two policemen, who escaped unhurt, were also asked to report at the command.A senior police source said,

“The DPO reported to the CP this morning (Monday). The community has always been peaceful, but the SARS men came to cause trouble. And now, some of our men are unaccounted for.”