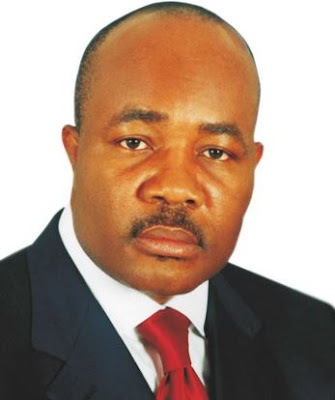 LOL...Nigerians and wayo! At the Akwa Ibom National Assembly Election Petition Tribunal on Wednesday in Abuja, a mild drama occurred when suddenly one of the witness of embattled ex governor Godswill Akpabio, Stanley Annah from Ikot Ekpene dramatically turned blind when given the card reader report to state the total number of accredited voters for Ikot Ekpene.

The witness suddenly turned blind and mute when told to read out the total number of accredited voters based on the card reader for Ikot Ekpene on exhibit P19. "I can’t see anything, I can’t read", he said. He wore glasses. Asked if truly he is a graduate of agriculture as he claimed, he said yes but still can’t read the figures in the document. He also claimed he has no idea of the number of polling units in Ikot Ekpene.

Before exiting the witness box, counsel to the 1st Respondent, Offiong Offiong SAN, asked the court to protect witnesses from vigorous cross examination from the petitioners counsel, Chief Assam Assam SAN. Responding the tribunal chairman said while the court cannot force a witness to answer a question, there are legally bound to answer questions posed to them at cross examination while the tribunal will take note of witnesses who claim in their statement on oath that they are graduates but pretend they can’t read when inside the witness box.