Woman cuts off husbands friend's penis during attempt to rape her 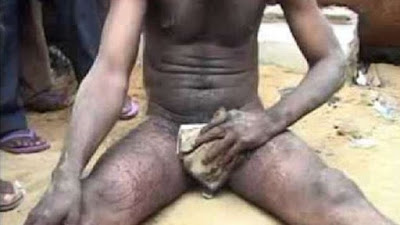 An Akwa-Ibom State indigene, identified as Mrs Okon Iniabasi, has reportedly cut off a man’s penis when he attempted to rape her.The incident happened in the Ikono Local Government Area of the state.

According to Punch,the man, Linus Ibok, is her husband’s best friend.According to the report,Ibok had on Saturday, accompanied his friend, Iniabasi’s husband, a petty trader to board a vehicle to Aba, Abia State to purchase items for his shop in the village.

Afterwards, Ibok trailed Iniabasi to her farm where his manhood was cut off as he tried to have canal knowledge of her.

Iniabasi said that she was not surprised when she saw Ibok in her farmland, as she thought he wanted to help her since he was almost like a member of their family but the shock came when Ibok confessed his undying love for her.

She reportedly rebuked him and asked him to leave the farm or she would report him to her husband. It was at that point Ibok grabbed her and attempted to rape her. Meanwhile, she allegedly let him undress and on noticing that, she used her machete to cut off his manhood.

After that, she ran to the village to inform others, who rushed to the farm to meet Ibok in the pool of his own blood with his manhood cut off.

He was rushed to an unnamed hospital where he is reportedly receiving treatment.