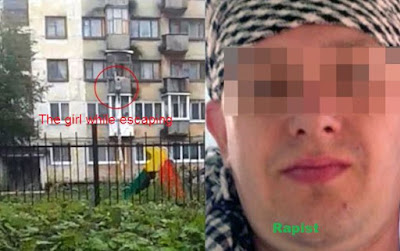 Images of the moment a young actress who tried to sell her virginity for $16,000 makes her desperate escape, after she was allegedly raped during the encounter has emerged. The 20-year-old from Azerbaijan, agreed to meet a man she met online in the city of Perm, in central Russia.

Images of her alleged escape were taken by an eye-witness as the girl tried to clamber down the makeshift rope.

The woman told police she was on her own as both of her parents had died and she wanted to collect money to develop her acting career.

Dnistrian’s girlfriend, who asked not to be named, admitted she was stunned after learning about the accusations, and claimed he had only ever been kind and gentle with her.

The court in Perm has said there are no plans for pursuing a case against her for prostitution or trying to sell her virginity and they are treating her as a victim.