Home Gossip News ‘You are yet to publicly declare your assets’ PDP tells Buhari, Osinbajo

‘You are yet to publicly declare your assets’ PDP tells Buhari, Osinbajo 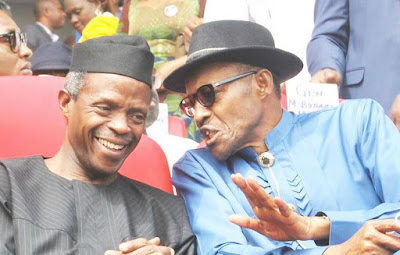 Read their press statement below...

The Peoples Democratic Party (PDP) describes as “a deceptive window-dressing to hoodwink unsuspecting Nigerians” the release, by an aide of the President, of a mere list of some belongings of President Muhammadu Buhari and his Vice, Prof. Yemi Osinbajo, in place of the pledge made to Nigerians by Mr. President as candidate of the APC on March 18, 2015, at exactly 5 pm.

The PDP however, observed that President Buhari and his vice failed to produce copies of their declarations, detailing the exact nature and value of respective assets.

PDP National Publicity Secretary, Chief Olisa Metuh, in a statement on Friday said “the release of a mere list of belongings falls short of credibility, transparency and anti-corruption standards as well as exposes the proclivity of the present administration for deception.”

“We have noted the release of a flimsy list of belongings of President Muhammadu Buhari and Vice President Yemi Osinbajo by the Presidency, who want such to pass as the public declaration of assets as pledged by the President.

“Nigerians are not deceived by this poor attempt at window-dressing designed by the Presidency to hoodwink the unsuspecting populace in a desperate bid to shore up its diminished image.

“We ask, is the resort to a mere list, instead of true copies of the declaration not a ploy to give the Presidency a window for denial in consonance with their widely observed inclination for flip flopping, backtracking and brazen denials of their statements and actions?

“All we want is credibility, integrity and sincerity of purpose. We are not questioning how a President, who by December last year, declared that he had only N1 million in his account, could suddenly now list N30 million in the same bank account by May 29, and after an expensive campaign; we are not yet demanding the public declaration of his assets in his wife’s name.

“We are not even applauding the multiplication of his cows from 150 to 250 in a space of three months, arising from his dual and conflicting pronouncements on this issue
“What the PDP and discerning Nigerians demand is for Mr. President to always stand by his words and pledge.
“Mr. President, this is a mere list of your belongings and not public declaration of assets in fulfillment of your covenant with Nigerians”