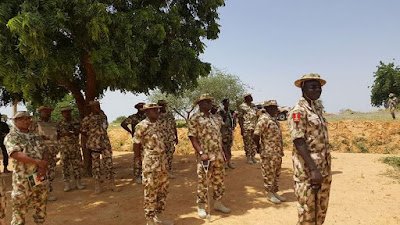 The Nigerian Army confirmed an attack on Sector 1 of 27 Task Force Brigade located at Gaidam, Yobe State, on Wednesday evening. Reinforcement was sent immediately and the terrorists were successfully repelled by the troops. Scores of terrorists died in the attack, however 3 soldiers lost their lives during the encounter.

Lieutenant General Tukur Yusuf Buratai the Chief of Army Staff (COAS), who was on operational visit to the North East, visited the location to assess the damage. He however gave further directives to the troops on how to defend and improve security in the North East.

General Buratai also met with some of the community leaders and assured them of their safety and improved security.

Situation in Geidam is now calm and people are going about their normal businesses.