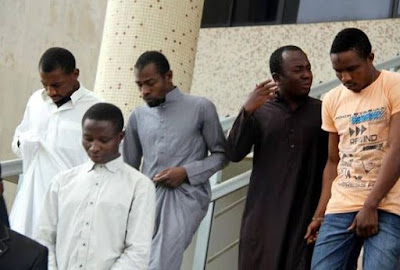 There was drama yesterday as five suspected bombers of Nyanya and Kuje, both satellite towns in Abuja, on October 2, 2015,were arraigned on five counts of terrorism.

Nasiru pleaded guilty to the possession of materials used for making Improvised Explosive Device (IED) and 12 already made ones when arrested on October 6 alongside other co-accused persons behind Military Cementary Airport Road in Abuja.
Nasiru, the fourth accused person, had along with the fifth, Abdullahi Nasiru, sought the charges to be interpreted to them in pidgin English.

He was repeatedly asked if he understood the charges and he maintained that he was guilty.

Even the intervention by his lawyer, Mr. Nurein Sulyman, who jumped up from his seat and approached the dock to ask him if he truly understood what he pleaded guilty to, would not make him change his plea.
While admitting his guilt, he said he was not the owner of the IED materials but his friend.
“No be me get am; na my friend get am,” he said in pidgin English.
The rest of the accused persons pleaded not guilty to the remaining charges
Daily Sun