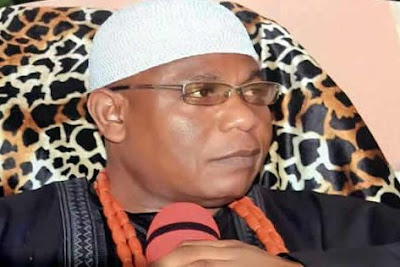 One of the condition was that the Igbo leader is forbidden from wearing any form of crown henceforth.The conditions were given by the monarch to end the crisis between him and the leader of the Igbo community in the town, Mr. Gregory Iloehike. The monarch said the condition must be met before Igbo traders in the area would be allowed to continue operating their businesses in the community.

Some other conditions included that the dethroned Eze must apologise for his behaviour, said to be unruly in at least three national dailies as well as go to broadcast stations to also tender an unreserved apology. He was also ordered to write a letter of apology to the monarch and the Deji-in-Council.
Oba Adelusi also directed that the Igbo leader should stop wearing any form of crown and must comply with all the directives of the palace.

To this end, the state Governor, Dr. Olusegun Mimiko, met with the two leaders separately on Tuesday evening at the Governor’s Office, Alagbaka, Akure, and reportedly pleaded with the Akure traditional ruler to forgive the embattled Igbo leader.

At the meeting, it was gathered that the governor maintained that the Igbo leader could not go against the tradition and custom of the land, as there was no basis or constitutional back up for such attitude.
The governor, however, thanked the youths of the town, praising them for their maturity and peaceful disposition towards the matter.

The traditional ruler maintained that a truce can then be brokered once the conditions were met.
As a result of the crisis, all shops occupied by Igbo people at the Moferere Market, Akure, remained closed as of the time of filing this report on Wednesday.