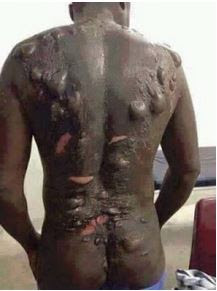 A man who was caught sleeping with his mother-in-law got what he never expected from his wife. The saying that hell has no fury as a woman scorned played itself out again when a married woman emptied a pot of boiling water on her husband.

According to veteran journalist, Mike Effiong, who posted the photo on his Facebook page, the man was caught in the act sleeping with his wife’s mother and she did this to him.