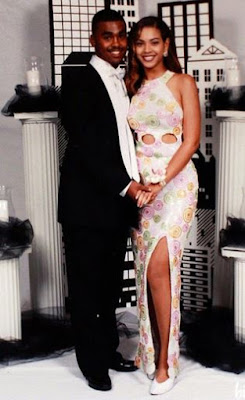 Beyonce's first love, Lyndall Locke, who dated the singer for a decade from when she was a 12-year-old wannabe until they split in 2003 said she had always been fixated on the pursuit of fame and rapidly became a ‘control freak’.Lyndall, now a chef who runs his own catering business, in an exclusive interview with The Mail on Sunday, he reveals the true scope of Beyonce's rise to fame.

On her father Matthew Knowles, he said

Mathew ‘Big Mac’ Knowles was the mastermind of ‘Project Beyoncé’, as it was known in the family. ‘Let me tell you, there was no messing with Big Mac. He gave me the third degree about who I was and what my intentions were,’ says Lyndall. ‘He gave me the talk about “not messing anything up.” ’ Lyndall says he understood this to mean not to get Beyoncé pregnant. ‘We shared our first kiss at a Brian McKnight concert when Bey was 13. She was a little southern belle. She was an awesome kisser. We would hang out and do normal boyfriend-girlfriend things, although I was never allowed to stay over.’
Lyndall recalls cycling up alongside his teenage girlfriend as she pounded the pavement and asking why she was belting out songs as she ran. Her answer was telling. ‘

Because Daddy told me it would increase my breath control and lung capacity,’ she replied. ‘I need to be able to perform onstage for hours when I become a star.’

Lyndall, 36, is not bitter and accepts that Beyoncé outgrew him

. ‘We were together for ten years. I saw the changes in her. She needed someone like Jay Z to take her to the next level. There’s no hard feelings,’She lived and breathed her career.’‘Beyoncé came to my high-school prom with me. It was a great evening. She laughed and danced and told me, “Lyndall, it’s so great to be normal, to be a kid.” ’

Every penny went into Beyoncé’s career,She kept her personal life separate from her career. We talked on the phone for hours, but I was never part of her music. I was an upbeat, positive kid. I made Beyoncé laugh. When she was with me it was downtime.’

Lyndall admits cheating on ‘good girl’ Beyoncé when he was 15 and she was 13.

‘I’ve never been a liar. I told her the truth which is that I lost my virginity to a girl from church. She cried and hung up on me.’ The pair split but reconciled. Lyndall believes it was because the Knowles family knew ‘I wasn’t after anything from them’.

He later cheated on her again towards the end of their relationship because she was constantly on the road and he felt ‘lonely.’

Lyndall says he experimented with marijuana and alcohol but his girlfriend was never tempted. ‘Beyoncé told me she would never smoke or drink because that would hurt her voice. She was a control freak.’In one incident, Beyoncé fled the scene of a minor car accident because she feared it would be ‘bad’ for her image… even though she was years away from becoming famous.‘When I finally got a lift home I was furious. Beyoncé told me, “I can’t be around a mess like that. I have to think smart and staying there would not have been smart.” I told her, “I wish we could have a normal life” and she said, “I don’t want a normal life. I’ve been waiting for this since I was a kid.”

Lyndall recalls the time he fell foul of Beyoncé’s fame ‘train’ was when he filled a cup with whisky in a limo taking Beyoncé to a Destiny’s Child concert in LA. ‘Mathew came up to me backstage and said,

“That’s not cool. How do you think that makes Beyoncé look? If you don’t pull it together and get a real career she’ll be gone. Beyoncé needs to be with someone who has it going on.”’

. ‘She started mentioning this other guy Jay Z a lot, casually dropping his name,’ he recalls. ‘I felt I was being edged out of her life.’

Then the inevitable: in 2003 the ten-year relationship ended with a whimper. Feeling ‘rejected and angry’ as Beyoncé prepared to set off on a world tour, he confronted her about Jay Z. ‘She said,

‘I’ve not spoken to Beyoncé in years. I’m happy for her, but I love my job and life. I sometimes joke that my son should have a playdate with Blue Ivy, but I don’t know how to get hold of Beyoncé any more. I know I was special to her and I know she loved me. At that age, you think you will be together for ever, but then life happens.’