Home Gossip News British nurse who contracted Ebola is some months ago is back in isolation..after getting the virus again

British nurse who contracted Ebola is some months ago is back in isolation..after getting the virus again 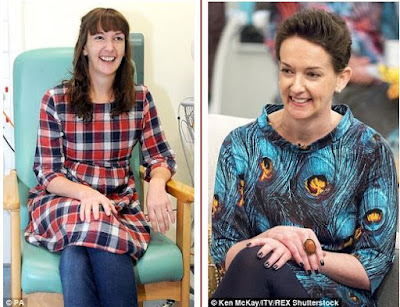 A British nurse who contracted Ebola in Sierre Leone is back in hospital today after falling ill with the deadly virus for a second time. Pauline Cafferkey, 39, was flown from Glasgow back to the Royal Free Hospital in north London by the RAF this morning, ten months after she first recovered from the illness.

The NHS nurse was wheeled from a jet at RAF Northolt by medics in hazard suits on a bed surrounded by a protective bubble before police closed roads so her ambulance could rush her to the nearby hospital.

She is said to have developed an 'unusual late complication' as a result of the original Ebola infection and tests have revealed that the virus is still lingering in her body.

Miss Cafferkey is now back in the isolation unit where she spent a month and became critically ill after being diagnosed with Ebola last December.
Confirming the relapse - and the seriousness of her condition - Health Secretary Jeremy Hunt tweeted: 'Thoughts with Pauline Cafferkey today as she battles Ebola for the second time'