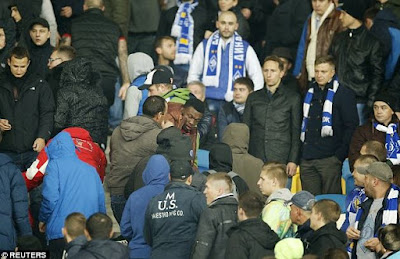 See what someone is proposing in 2015. Volodimir Spilchenko, the director of Dynamo Kiev's (arguably Ukraine's biggest club) home ground, says that having black fans segregated from other supporters could prevent racism.

About four black men were reportedly attacked and racially abused last week during a home game against Chelsea in the champions league,a situation that has become the norm in that part of the world and UEFA will decide on what disciplinary sanctions to take against Dynamo on Tuesday after the shocking footage was released.


'We are trying, maybe, to make a special sector (for black fans),' Spilchenko said, 'In order to avoid the manifestation of racism.'

The notion was suggested to the club by a journalist, but Spilchenko labelled it a 'good idea' and said: 'We'll probably listen to your offer,' in an interview reported by the Washington Post.

But after the incident against Chelsea, Ukraine Football Federation vice-president Ohor Kochetov denied that there was a problem with racism at the Olimpiyskiy Stadium and questioned the motives of the black men who were in that particular section of the stadium.

Kochetov told the Ukrainian news portal Vesti: '[The presence of the black fans] in the sector that is always occupied by the "Rodychi" ultras is highly surprising to everyone.
'People of that category (black people) have never been there. Initial information indicates that these people were without tickets and were holding flares.

'Maybe this was a specially planned provocation. These are all questions that require answers'

The night before the game in Kiev, Chelsea fans were attacked by around 70 balaclava-clad Dynamo thugs in the city centre with at least one English supporter being hospitalised.