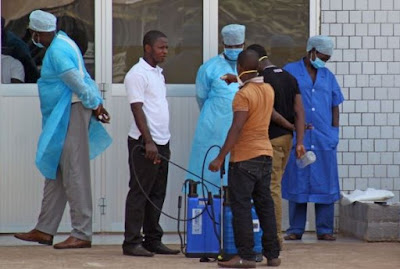 Fear has gripped workers and pa­tients of the University of Calabar Teaching Hospital (UCTH) in Calabar, Cross River State over a suspect­ed case of the Ebola Virus Disease (EVD).

Although management of the hospital denied the development, it, neverthe­less, shut down the Acci­dent and Emergency ward after the Ebola virus scare hit the health institution yesterday.15 people have also been quarantined as the federal government has dispatched a medical team to the state.

Earlier, Daily Sun revealed that the scare was induced by the death of a patient, who was brought in from nearby Akpabuyo community in Akpabuyo Local Govern­ment Area of the state for treatment on Tuesday eve­ning, but reportedly died at about 2 a.m. yesterday, of symptoms related to the deadly virus.
The patient, whose identity could not be as­certained as at press time, was said to have vomited so much blood and bled from other sensitive parts of his body.

Sources said the body temperature of the patient also ran high, when he was brought in by family members, adding that the patient died shortly after samples were taken from his blood for investigation.

It was also gathered that due to the incident, the Accident and Emergency ward of the hospital has been shut down.

A source said: “A pa­tient was brought in on Tuesday, vomiting, stool­ing and bleeding from the nose and mouth. He had high temperature. It was suspected that he had haemorrhagic fever, but it has not been confirmed. He died at about 2 a.m. yesterday and his body has been quarantined, while the ward was shut down.”

When contacted, Chair­man of the Medical Ad­visory Committee of UCTH, Dr. Queenet Kalu said there was a case of a patient, who died of symptoms suspected to be haemorrhagic fever.

“Yes, we had a patient that was suspected to have died of haemorrhagic fe­ver, but it does not call for panic as everything is under control. There is no need for the public to be scared of EVD as it has not been confirmed.”

As at the time of going to press, all the nurses and medical personnel, who had contacts with the pa­tient have been invited back to the hospital and quarantined for treatment.