Econet chairman Strive Masiyiwa testifies against Ibori in UK court, shares more of his bitter experience with the former governor 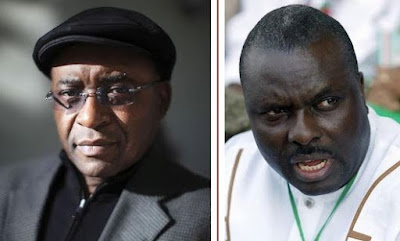 Few days after making startling revelations about former Delta state governor, James Ibori and how he demanded $4.5 million bribe from him to successfully run Econet in Nigeria (read here), Strive Masiyiwa, the chairman of the telecommunication company, shared another part of his bitter encounter with Ibori. According to a new post on his Facebook wall, Masiyiwa said he was called upon by UK courts to testify against Ibori in London which he said he did without hesitation.

He stressed in this post that corrupt practices in Nigeria and by extension Africa is always carried out by at least one foreign accomplice. Read his post after the cut..

Corruption often involves very sophisticated bankers and lawyers in Western financial centers. When corruption happens in Nigeria, or any other African country, it usually also happens at the same time with at least one accomplice on the other side of the world, whether in London, Geneva, or the like.

The London lawyer Bhadresh Gohil, who I wrote about in my last post, is just one of scores of international advisors who handle the sophisticated movement of money in the world, in this case the money stolen from the Nigerian people and hidden in overseas bank accounts.

___When you choose financial or legal advisors, choose very wisely. Your very life could depend on it.

When Mr Gohil and other family and associates of Delta State governor James Ibori were arrested in London, I was asked by the British government to be a state witness in their trial. I agreed without hesitation.

Being a witness in such a case is not easy. It meant that I had to stop working for several weeks and just focus on preparation to give evidence. I knew I would be grilled in an open court by expensive defense lawyers who would try to challenge my integrity.

I was told that many potential witnesses had declined to give evidence in open court out of fear.

I headed to England as a "Witness to Her Majesty's Government." For me personally, I went as a "witness on behalf of the people of Nigeria and Africa." It was my duty.

A witness can help ensure justice is done. Solid evidence is crucial in ensuring the truth is heard and that the rule of law is upheld. Without witness testimony, criminals can operate with impunity, one of the greatest threats to Africa’s future.

What is impunity? It basically means evil actions have no legal consequences. As a result, criminals are allowed to stay busy committing their crimes, knowing they can get away with it without punishment.

___A culture of impunity endangers the prospects for prosperity and security in Africa in every imaginable way.

Mr Ibori's wife, his sister, and his mistress, who each had each received money from the sale of the shares in V-Mobile (which were assets of the people of Nigeria), were also arrested in London and were sentenced to five years in prison.

My written witness statements were submitted and I prepared to appear in court to be cross-examined.

The night before I was due to take the stand in an open London court as witness for the state, I was told Mr Gohil and his associates had suddenly pleaded guilty. My lawyers told me that my witness statement was too strong and Mr Gohil and his team were afraid they would get even stiffer sentences!

In late 2010, Mr Gohil was sentenced to a total of 10 years in prison for crimes including conspiracy to defraud, conspiracy to make false instruments, money laundering and proceeds of crime. The sentencing judge said to him, "You were a solicitor of the Supreme Court and holding out as a man of integrity... You have brought shame on your family, your profession and your country.”

When corrupt people like this get into trouble, they often pay some of the best lawyers in the world to help them get out of it. Taking them on successfully requires authorities equally determined and sophisticated in their approach. These authorities in turn need the cooperation of witnesses prepared to stand in court and help with the prosecution.