Fayose reacts to Wike's election nullification - This is worse than corruption.. 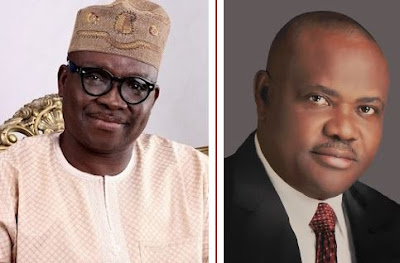 Governor Ayodele Fayose of Ekiti State has cautioned the ruling All Progressives Congress, APC, and President Muhammadu Buhari to abstain from influencing tribunal judgements in favour of the APC.

Fayose was reacting on Saturday to the tribunal judgement that sacked Governor Nyesom Wike of Rivers State and the one that ruled for a re-run in Akwa Ibom.

Speaking through his Special Assistant on Public Communications and New Media, Lere Olayinka, the Governor said

“The seeming collaboration between the All Progressives Congress (APC) led Federal Government and a section of the judiciary is worrisome and portends grave danger to the corporate existence of Nigeria.“This is worse than corruption that the president claimed to be fighting,

The Governor added that ..
“the desperation to take over the South-south states of Rivers and Akwa Ibom through the backdoor by President Muhammadu Buhari and his APC, in preparation for 2019, using the judiciary may, cause anarchy in the country.”
He also accused the APC and President Buhari of another plot to rig the forthcoming Kogi and Bayelsa states governorship election using the newly appointed Independent National Electoral Commission (INEC) Chairman, Prof. Mahmood Yakubu and the Director General of Department of State Security (DSS), Alhaji Lawal Daura.