Girl Becomes Possessed By the Devil after Playing Ouija Board App 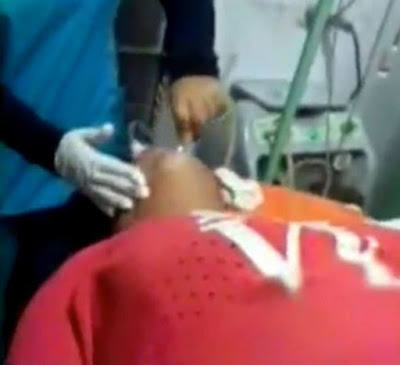 Shocking footage has emerged of a young girl 'possessed by the devil' after playing with a Ouija board mobile phone app.

The 18-year-old, identified as Patricia Quispe, is seen convulsing as paramedics try to restrain her.

According to witnesses, the young woman from Lima, Peru, had been playing with her friends on a mobile phone version of the board game that evokes the spirits.

But when she returned home her parents noticed that she seemed to be unwell.


They said she began fitting and foaming at the mouth and her voice deepened into a raspy tone.

In another segment of the video she can be heard shouting: "Please give me my phone" and "Ma, these doctors don’t know what they’re doing, take me home."

Locals who witnessed the incident were convinced she had been possessed by satanic spirits, according to local media.

Medics confirmed that the young woman seemed to be extremely strong and it was difficult to control her.

She struggled for more than half an hour before they finally managed to restrain her.

The woman was committed to a psychiatric ward as doctors tried to find out more about what was causing her strange behaviour.