How 2 Prostitutes found Lamar Odom lying unconscious in a brothel 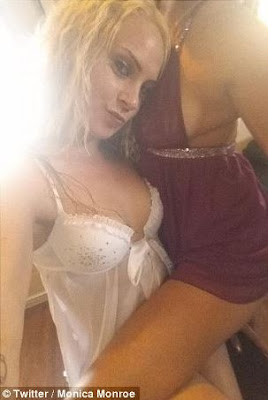 According to Daily Mail. Lamar Odom was found unconscious on Tuesday afternoon by two prostitutes named Ryder Cherry and Monica Monroe at Dennis Hof's Love Ranch, the legal brothel where he was partying for days.

The establishment in Crystal, Nevada, is just one of the sex-for-cash businesses in the state owned by the star of the HBO series Cathouse as he also has the Moonlite BunnyRanch in Carson City.

The Love Ranch, which is located about 80 miles north of Las Vegas, offers a number of services including 4-Play for Two, Oil Wrestling, Viagra and Vibrators, and the Girlfriend Experience (GFE).There are sometimes as many as 50 women working onsite at the 24-hour brothels and they are open 365 days a year in order to provide services with no appointment required.

Patrons are allowed to attempt to 'line up' one of the ladies beforehand via the internet or message boards for the business, but they can also just come to the bar and drink to try and find a date.

Between all of the ranches, including the Love Ranch, there are more than 500 licensed ladies and each one of the brothels typically services between 50 and 100 clients per day.

"We picked him up at his home in Vegas in a gated community. He was in a great mood and having fun with the girls. We don't think he was doing drugs because he slept every night. He woke up in a great mood."

Hoff added, "He got calls on Sunday that kind of bummed him out. Besides that, he was in great state of mind. He was eating good. My girls were cooking for him," and noted that the girls "gave him a bottle of Cognac on Saturday and there is a third of a bottle left."

Odom was supposedly with a girl in the early morning hours on Tuesday. Around 6 a.m., the woman with Lamar touched him to tell him that she was leaving and he acknowledged her before going back to sleep.

At approximately 3:15 p.m., two of the girls found Lamar unconscious. It was reported that he was taking herbal Viagra during his stay at the ranch.

According to the brothel's website: 'What is a GFE?

'Imagine a girl you can truly be yourself around.

'Someone who is always happy to see you, accepts you for who you are, as you are and is waiting to fulfill your every need - physical, emotional, sexual... with no strings attached.'
The women who work at the ranch are independent contractors so there are no set prices in place, but customers at the brothel reportedly have to shell out hundreds of dollars to get tended to.