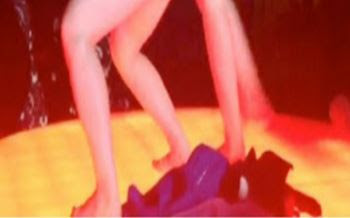 These Two women jumped up on stage and stripped n*ked 'for the chance to win an old iPhone '. One of the ladies who was reported to be married stripped off her clothes and gyrated in front of stunned club guests.

At one point the MC snatched away the underwear of one of the contestants as she tried to cover her modesty, instead throwing them into the crowd.

As she turns around to face the other way she wiggles her bottom to the music and is joined on stage by a second woman.
The bizarre dance contest took place in the city of Berezniki in central Russia's Perm Krai region with an iPhone 5s reportedly being offered as a prize.

But their amateur dancing, which was uploaded onto social media, got negative attention.