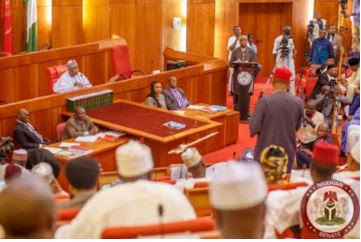 Mr. Amaechi’s screening came after weeks of speculation that ongoing investigations into his corrupt practices in Rivers State would prevent his confirmation by the Senate.

At the center of this controversy is the report on Mr. Amaechi’s conduct while in office, which is under review by the Senate Committee on Ethics, Privileges, and Public Petitions.

SaharaReporters had earlier reported that Mr. Amaechi could face an arduous screening by the Senate because of growing dissent against his nomination from both the Peoples Democratic Party (PDP) and All Progressives Congress (APC) members in the National Assembly. It has also been reported that the current Rivers State Governor, Nyesom Wike, was influencing Senate members to not confirm Mr. Amaechi.

The Senate Minority Leader, Godswill Akpabio, insisted that the PDP caucus would not question Mr. Amaechi as the report by the Senate Committee on Ethics, Privileges, and Public Petitions had yet to be debated by the Senate.

However, the Senate Majority Leader, Ali Ndume, stated that Mr. Amaechi should take a bow and go, arguing that one of his duties as Senate leader is to continue the ministerial screenings.

Senate President Bukola Saraki did put several questions to Mr. Amaechi addressing his conduct in public office. Mr. Amaechi responded to Senator Saraki’s questions by telling members of the Senate that he has a personal dislike for corruption and that he defected to the APC because the only “solution [to corruption] was to change the government. And then, we presented a signpost candidate who is incorruptible.”

Mr. Amaechi noted that he was never indicted in the report by the Judicial Commission of Inquiry of Rivers State. He went on to say, “I have never collected a bribe in my life.”

Mr. Amaechi, also touched on his plans as minister, stressing that the construction of the East West Road would be a top priority should he become minister.