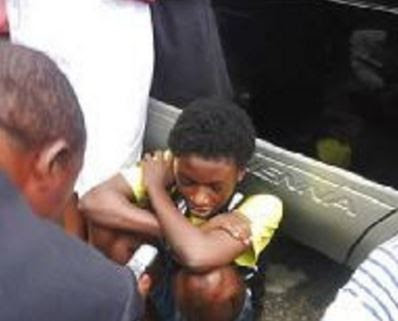 Mariam Ekanem, a 20-year-old school drop out from Odukpani Local Government Area of Cross River State, said yesterday in Calabar that poverty and lack of where to stay after she gave birth made her sell her two weeks old baby girl for N20,000.

According to Vanguard, Maria, who was arrested by the police along five other accomplices, said her boyfriend who got her pregnant, asked her to abort the baby but said a doctor helped her with free antenatal care and food until she gave birth.

This, she added, prompted her to agree to sell the baby when arrangements were made to sell.

Paraded along with Maria were a 55-year-old medical doctor, Okokon Offiong Okoho, the proprietor of Evangel Clinic,of 2, Atu Street; a 70-year-old matron of Sadatoe Maternity located at Umoh Street and a nurse at the maternity who allegedly made the plans to sell the girl to an Abuja-based lady who is now on the run.

However, plans to sell the two weeks old girl was leaked to the police by a Senior Secondary Two girl of NYSC

Demonstration Secondary School, Calabar , Maria Elemi, whose parents Maria was living with after she delivered the baby.

“When I came back from school on Monday, Maria told me she wanted to take the baby to the parents of the boy who impregnated her since she can no longer cope with taking care of the baby,” she said.

Maria said when they got to Fuller by Inyang Street in Calabar South, they met Mrs Elemi and her daughter in an SUV car, adding that Maria gave the girl to the matron who handed her over to the buyer.

She said: “The woman gave Maria N20,000 and asked her to pay the nurse at the Evangel Clinic and use the rest for herself.”

The girl said she became suspicious when the driver of the SUV told the woman with the baby that her husband said she should take her to the airport to catch a flight to Abuja .

“I started wondering why they should take the girl to the airport when the boyfriend to Maria and her parents live here in Calabar,” Maria stated.