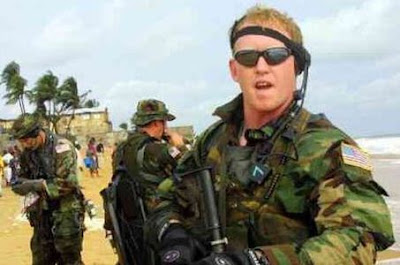 A British ISIS supporter has published the name and address of the Navy Seal who killed Osama bin Laden and called on American extremists to execute him.

Mirror Online has been monitoring jihadi chat on social media and has spotted several people linking to a text file containing instructions on how to find Robert O'Neill, who claimed to have killed the al Qaeda chief. This information was shared by an unnamed British extremist, who dubbed O'Neill a "number one target" and called for his immediate death.

The address is now being shared on social media along with a sinister hashtag.

"I leave this info of Robert O'Neill for my brothers in America and Al Qaeda in the U.S, as a number one target to eventually hunt down and kill," the ISIS supporter wrote.

He also posted a link to a story in the International Business Times in which O'Neill's father said the family were "not afraid of ISIS. He is understood to have separated from his wife over security concerns.

"We're actually looking into changing my name," she told Esquire in 2013."Changing the kids' names, taking my husband's name off the house, paying off our cars."Essentially deleting him from our lives, but for safety reasons.