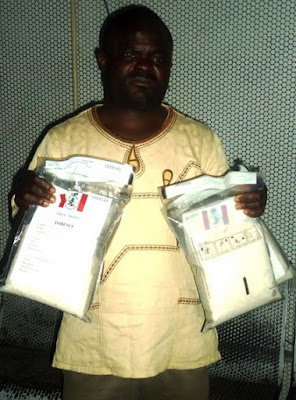 A South African-based Nigerian, Ayoola Adebayo, was arrested with 3.920kg of substances found to be methamphetamine.

According to a statement by the spokesperson of the National Drug Law Enforcement Agency,Mr. Mitchell Ofoyeju, the suspect was arrested at the Murtala Mohammed Airport during the outward screening of passengers on an Ethiopian airline flight to South Africa.

“A Nigerian living in South Africa by name Ayoola Ayodeji Adebayo was found in possession of 3.920kg of methamphetamine on his way to South Africa. The drug was found in a false bottom of his luggage while he was trying to check-in the luggage. The case is being investigated.

The suspect who holds a Higher National Diploma in Estate Management at Osun State College of Technology in 2006, said ....

“I thought the drug would not be detected because it was neatly concealed. This is a big mistake on my part because I have sustained my family with the grocery business. It will not happen again if I can get out of this problem.”