Man caught with $34,000 inside boxer shorts at Lagos airport 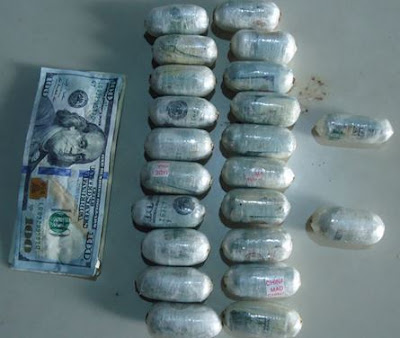 A passenger was arrested while trying to smuggle 23 wraps containing $34,000. According to the National Drug Law Enforcement Agency (NDLEA),the suspect, Ozoh Ikenna, was arrested yesterday at the Murtala Mohammed International Airport (MMIA), Lagos on his way to Brazil.

The dollars were detected during screening of passengers on the Etihad Airways flight to Abu Dhabi.

The money was packed in wraps similar to narcotics and concealed in his shorts.

The NDLEA Airport Commander, Ahmadu Garba, said the arrest was facilitated by the scanning machine.
“The wraps of dollars found on Ozoh Ikenna were detected with the aid of scanning machine. We also conducted a follow-up operation where one Ogbo Emmanuel who gave Ozoh $34,000 was arrested,”

The Assets and Financial Investigation Directorate headed by Mrs Victoria Egbase revealed that the suspects were involved in the laundering of a substantial amount of money which was illicit drug proceeds.

”We were able to trace over N226,000,000 to one bank account, belonging to the second suspect, Ogbo Emmanuel. The account name is Eternal God International Limited”.

Ozoh, in his statement, said:

“I live in Brazil since 2008. I was paid to smuggle the $34,000 to Brazil. They promised to pay me five per cent. I agreed to smuggle the money to alleviate my financial hardship. I could not swallow the wraps, so I decided to hide them in my shorts.”

Investigation also revealed that suspected drug proceeds were regularly deposited in the said bank account by members of an international drug cell that smuggles cocaine from South America to West Africa.

Findings also revealed that the cosmetic business of Ogbo Emmanuel at the Trade Fair Complex, Lagos was a mere cover-up as his sales record did not justify the large flow of money into his bank account. A Hyundai Tucson Jeep was seized as an exhibit during the raid operation.

Chairman/Chief Executive of the NDLEA, Ahmadu Giade, said that the agency is strategically targeting criminal wealth.