Man kills mum, cut her heart out before Ejaculating [PHOTO] 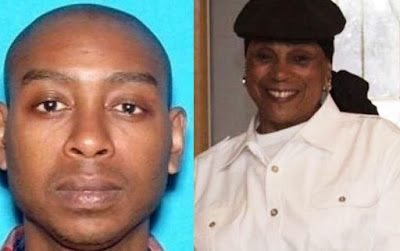 A man admitted to murdering his mum before slicing open her chest and removing her heart with his bare hands, it was reported.

Omar Pettigen reportedly told police he then masturbated as a "release" after mutilating the body of his mother Nailah Pettigen.The 31-year-old was arrested five days after the horrific killing in Fremont, California, the Daily News reported. He was reportedly caught after his father, who lives in New Mexico, contacted police to check on his ex-wife and son after not hearing from them.

Officers arrived at the Pettigen's home and found Nailah, 64, dead in her bedroom with her underwear around her ankles, where she "appeared to have been disemboweled", according to police.

A post mortem showed the former maths teacher had been cut from her neck to her cervix and had also been shot at least seven times.
Pettigen allegedly argued with his mother, who he claims pulled a gun on him, before he grabbed a hammer off the bedroom wall to knock the weapon from her hand.

He then allegedly returned with a tomahawk and beat her before shooting her in the back four times with a gun he retrieved from a wardrobe.
The son is then believed to have sliced open her chest with a knife and removed her heart with his bare hands before putting it back in her body.

Pettigen reportedly told police he murdered his mum because she was killing herself with the prescription painkillers oxycodone, which he claims she had become addicted to after hip and knee problems and surgery.

He allegedly added that, after the sickening attack, he masturbated because "he needed to be with himself and needed a release after the event" before going out drinking with friends, charging documents seen by the Daily News show.