Meek Mill Disses Wale on Instagram: “You Not MMG No More! Broke rapper” 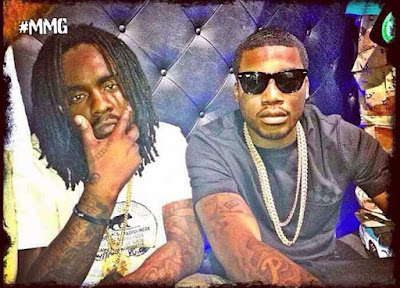 In my usual fashion, I was checking Twitter for gist and saw that rapper Nicki Minaj's boo Meek Mill was trending.

Why? He attacked Wale following his appearance on the Breakfast Club.

Meek Mill didn't find the comments funny and made sure to express his distaste via several rants on social media.
Taking to Instagram, Meek attacked Wale for the comments he made on the Breakfast Club where he discussed Meek’s beef with Drake as well as his own struggles with depression. In the conversation he criticized Meek’s approach to the beef in a fairly level-headed way, saying “he brought a pencil to a gunfight,” and suggesting that fans would take Drake’s side no matter what Meek’s response was.
Meek accused Wale of gossiping to promote his new music, as well as saying he’s no longer a part of MMG. Later on, he claims that Wale was attempting to call him because he thought Ross owed them both money. He also takes plenty of shots about Wale’s depression throughout.

Niggas b doing all this to drop a new record gossiping about they hoe ass feelings and they personal life because they miserable and nobody don’t rock wit them! Really stay away from me Fam! U not MMG NOMORE! This why u can’t get my number you a hoe! �������� and u dead cracked right now @wale foh nuttttt! I wasn’t even mad at you Fam u got some real issues with yaself and you jealous! Broke rapper! This my last time I think addressing shit on the Internet …. But if I don’t talk about it one of you dudes gone get hurt speaking my name like it’s sweet! Y’all niggas gone stop mentioning my name like it ain’t no consequences…. I’m off this internet! I don’t speak on Mmg in interviews unless it’s good! U a clown … We don’t wanna hear you nomore Fam! Go jump off a roof like u been tryna do chump! He not MMG IM MAKING THAT CALL … He been tryna call me saying Rozay owe us money… He don’t owe me shit and if he do I’ll get it later …. Go that away!