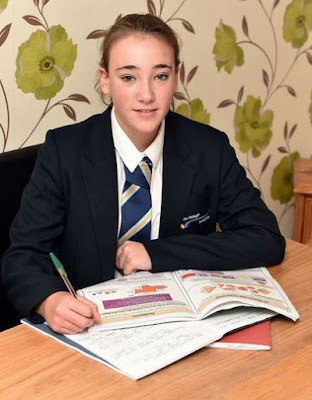 A model student has been told to stay away from class after developing a suspected life-threatening allergy to school.

According to the Guardian UK, Doctors have now instructed her to stay at home until tests can be done to uncover what is causing the potentially fatal reactions.She said:

"I had been to registration and was walking to the first lesson when started feeling itchy and hot and I told my friend and she told the teacher.They called mum and she rushed me to the GP for advice."The next day feeling better Tiffiney returned to school but within 20 minutes of being inside the building she began suffering an even worse reaction.

Finally they have ordered her to stay at home until they can get to the bottom of what is causing the reactions.

"People think it's a joke. All the kids must be thinking it's great to be allergic to school but for Tiffiney it is life and death.

The paramedics said if it had been left longer, she would have died."It's definitely something in the school."

Samples of paintwork and new carpets which have been fitted at the school have been taken for tests.