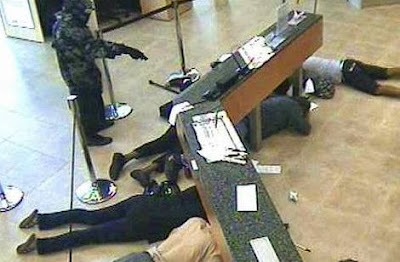 This afternoon ,dare devil robbers invaded 4th Avenue, Festac and robbed two banks. The robbers reportedly killed four people including a woman and her two-year-old child.They were said to have entered into Festac Town through the canal in a speed boat.

In a new development, the Police say they recovered some of the loot.

The robbery gang numbering over 40 stormed both Diamond and Access Banks at 4th Avenue, FESTAC Town, Lagos, and the Area E Command said they tried their best despite being at a disadvantage numerically.

Speaking to THISDAY exclusively, the Area E Commander, ACP Frank Mba, said they recovered about 27million from the robbers, who were forced to drop the stolen money before they fled.

He also said they recovered about 240 rounds of AK47 live ammunition, adding that the money has been deposited at another branch of Diamond Bank, still in FESTAC Town.