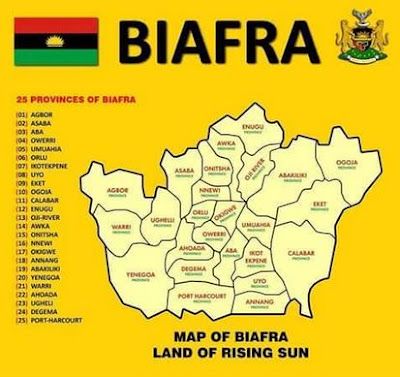 Movement for Actualization of Sovereign State of Biafra (MASSOB) has be­gun to restrategize on how to successfully establish a sovereign state of Biafra.

The group’s Deputy Na­tional Director of Informa­tion, Mazi Chris Anierobi Mocha, in a statement made available to Daily Sun yesterday said the re­cent speech by President Muhammadu Buhari at the United Nations General Assembly meeting raised hope for the actualization of the State of Biafra because the president pressurized member nations to grant freedom to Palestine from the State of Israel and other nations seeking self seces­sion in the world.

Mocha noted that the out­come of President Buhari’s speech at the just-conclud­ed meeting had encouraged nations seeking freedom to step up their separatist agi­tations.

“Some of the enclaves and proposed nations that have stepped up their sepa­ratist activities included Palastine, the new Biafra, Northern Spain, Tibet, Northern Canada, Western Sahara and 20 others,” he said.

The MASSOB spokes­man noted that former pres­ident, Olusegun Obasanjo before the independence of Kosovo in February 17, 2008, had expressed con­cern that the recognition of Kosovo from Serbia would give momentum to the se­cessionist movement in Ni­geria, with the latest moves of massive spread of rec­ognition of independence to nations seeking separate existence.

He stated that based on Buhari’s statement, “MAS­SOB has begun to re-or­ganise, re-prioritise and re-strategise on its process of fully establishing a sov­ereign state of Biafra.”

The Anambra State Com­missioner of Police, Mr. Karma Hosea, had banned the activities of MASSOB in the state; but members of the group had insisted that nobody could stop them because the organisa­tion had the backing of the United Nations (UN) Char­ter on indigenous peoples’ right to self-determination.

It pointed out that UN General Assembly had on September 13, 2007, adopted a resolution call­ing for the recognition of the world’s 370 million peoples’ right to self-de­termination, and vowed to pursue vigorously, the agitation for self-determi­nation and to impart ideas, hold meetings in order to discuss freely without in­terference from any person or persons.