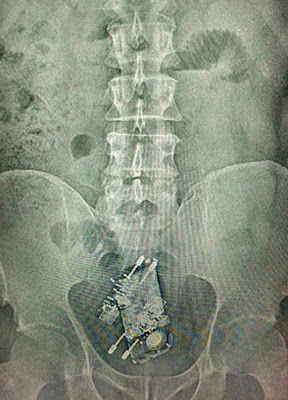 A convict swallowed a mobile phone and two chargers in a crazy attempt to smuggle them into his jail after day release.

X-rays showed up the objects inside his stomach as he passed through security on his way back into Papuda Prison in Brazil.

Mirror Uk reports the unnamed inmate was taken to hospital for an operation to remove them.

The phone and chargers had been wrapped in plastic.
The prisoner had been allowed out to celebrate Brazil’s National Children’s Day, when youngsters across the country receive gifts and families unite to celebrate childhood.

The discovery was made as he returned to jail yesterday morning.

It is not known why he is in prison.

Jail governors said he would now lose benefits he had accrued and be punished for his new crime.