Prostitute bites off man's ear over sex in Lagos [PHOTO] 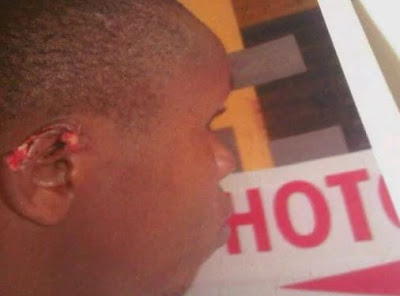 A sex worker Precious Osas, 36, has been arrested and charged before an Isolo Magistrates’ Court for biting off the ear of Omokwa Chikwado, a 25-year-old man.

The incident occurred over a scuffle, which emerged after sex at an unidentified hotel in Okota, Lagos State, where they lodged for a night, P.M News reports.

Osas, a commercial sex worker, allegedly collected N3, 500 from Chikwado for an all-night sex romp but failed to fulfill her own part of the bargain.
Trouble started after Osas reportedly allowed Chikwado a round of sex and told him she wasn’t ready for another round until he paid her more money.

However, Osas allegedly struggled to cope with Chikwado throughout the period the sex lasted because of his high libido.
Chikwado, according to reports, was angered as Osas didn’t meet her side of the bargain.

He reportedly started an argument, which resulted in exchange of words and a fight ensued between the alleged sex partners.

During the fight, Osas allegedly grabbed Chikwado’s right ear and bit off part of it and Chikwado who was bleeding profusely, raised an alarm which attracted the attention of the hotel workers.

Reports revealed that the duo were handed over to the police at Ikota division.

Chikwado on interrogation at the station told the police how he paid Osas N3, 500 for sex throughout the night and equally paid extra N350 for registration.

He said afterwards, Osas allowed him to have sex only once and told him if he wanted another round, he should pay extra money.

Subsequently, Osas reportedly admitted that Chikwado paid the said amount and she allowed him to have sex with her as agreed, but that after the first round, he was demanding for extra round which she refused, noting that Chikwado had a high libido because he was drunk.

According to reports, the police charged Osas with conducting herself in a disorderly manner by inflicting grievous harm on Chikwado.

Osas, however, pleaded not guilty.