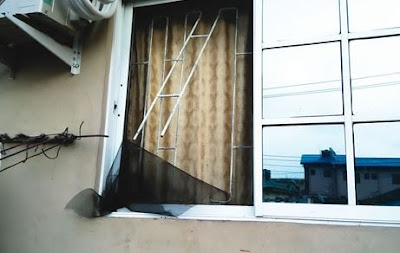 Residents of Ibukun Oluwa community, in the Oworonsoki area of Lagos State have been under continuous attacks by robbers, who invaded at least six streets and injured no fewer than 15 residents.

Punch Metro learnt that the robbers, who came in a large number, carted away money, laptops, handsets, and other valuables.

A resident of Abiola Street, Mrs. Ogunsola Adebimpe, said the robbers entered their street at about 1am, adding that the men were in their multitudes.He said

“They came around 1am and six of them pounced on the security man. The man ran, but they pursued and dealt him fatal blows before leaving him for dead.

“They then started entering from one house to another. They broke down the door of our house and went into rooms,” she said.

A woman, who spoke on condition of anonymity, explained that the robbers entered her room and attacked her and her son with cutlasses.

“I was half naked when they came in. When I told them that I had nothing to give them, they cut my leg with a cutlass.

“Then they took my child and said they would kill him if I didn’t give them something. I quickly handed over my brand new phone to them,” she added.

A resident, Titilayo Ogunsakin, said the robbers spent about two hours on the street, before the police arrived.

“Those boys will be between the ages of 18 and 20. It was 15 minutes after they left that the police arrived and they could not arrest anybody,” she added.

A victim, Ezekiel Ahiwe, said the robbers broke into his room around 3am.

He said, “They had a sledgehammer and after they successfully broke in last wednesday, one of them began to attack me with a cutlass.

“He cut me several times in the head and shoulder. He took me out of the room and I heard them shouting at my wife to bring out everything we had, which they took away.”

Another victim on the street, who identified herself simply as Mrs. Eguavon, said the robbers injured her son in the hand and left with their phones and a laptop.

“It was a hell of an experience for me and my family,” she added.

A welder on Idera Street, Mr. Dayo Awodehinde, claimed that he lost most of his working tools after the robbers raided the street.

He said, “They came around 3am, and broke down the door into my workshop.