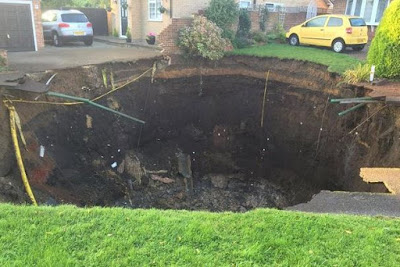 A scary sinkhole suddenly opened up in a street, forcing families to be evacuated from their homes. The massive sinkhole is 66ft (20 metres) wide and around 33ft (10 metres) opened up in the middle of a quiet street.It spread across the front garden of a property on Fontmell Close in St Albans,Hertfordshire.

According to the Guardian ,inhabitants heard a crash in the middle of the night and looked out to see the road had collapsed.

More than 50 properties are without gas and electricity, according to a fire service spokeswoman.

The fire service said it was already aware of a small hole on Wednesday and it was due to be filled in, but it then received a call at 1.30am to say it had "opened up substantially" overnight.

Sinkholes are created when the surface layer of the ground collapses.