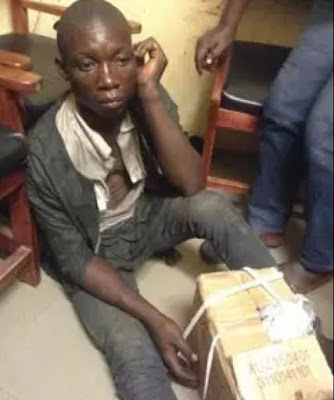 Lagos State Police Command (Rapid Response Squad, RRS) this weekend, arrested one Timothy Ojomandu, alleged to be a member of a three-man gang that hides under gridlock to attack and rob motorists around Mile 2 area in the state.

The suspect was caught in the act at about 7:30 pm by the team of policemen who responded to a distress call made by the driver of Mitsubishi Canter with number plate, FKJ 676 XF, after the suspect and his gang members had successfully stolen one carton of cell battery from the truck which was fully loaded with hundreds of the cartons.

The truck driver, Mr. Ajiboye Mogaji, who accompanied the suspect to the RRS Headquarters at Alausa, told the Police that he sighted the suspect from the side mirror of his vehicle when he sneaked-in through the back of the truck.

However, when his partner saw me alighting from the vehicle, he absconded with that one carton, and I held the suspect by his trousers when he wanted to jump down from the truck. Then, I shouted for help and the Policemen from RRS who were patrolling the area responded swiftly to the distress call.”
He further thanked the Policemen for coming to his rescue at the appropriate time before the suspect could escape.