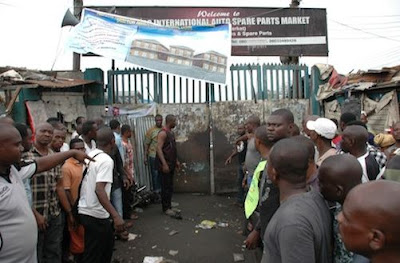 Traders at Ladipo Main Market in Mushin, Lagos State, western Nigeria, were in shock and tears as bulldozer and a team of security personnel arrived the market on Thursday to demolish the market for reconstruction.

As at 4.30 pm on Thursday shops had been brought down while the exercise continues on Friday. Traders were ordered to leave the market with their goods and when they attempted to resist, the bulldozer moved in and started the demolition.

Some goods were destroyed as many of the traders were not in their shops because of the Independence Day celebration and public holiday.
Traders and the Mushin Local government had been at loggerheads over plans to re-construct the market and turn it into a modern plaza.The traders, through their leaders alleged that they were not carried along before the plans to re-construct the market was carried out.

P.M.NEWS gathered that it was agreed that the traders would vacate their shops on 1 October, 2015 for work to begin in some parts of the market.It was in line with the agreement that the developer moved in and started the demolition.

The traders who spoke to our reporter said they had agreed to vacate the market on Sunday, 4 October, for work to start on Monday, 5 October.

They said they were shocked when the the government officials came and asked the traders to move out and did not allow them to remove anything in their shops before demolishing their shops.