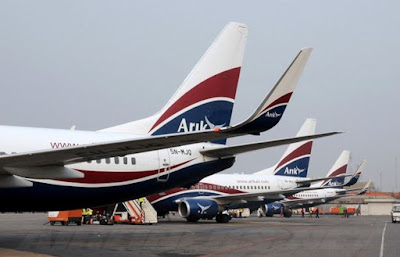 Two Boeing 737-800NG aircraft belonging to Arik Air were grounded by the carrier on Tuesday afternoon after they were involved in a ground collision on the tarmac of the Murtala Muhammed Airport, Lagos,Punch reports ..

According to the airline, nobody was hurt in the incident, which occurred at the General Aviation Terminal of the airport.

Arik Air’s spokesperson, Mr. Ola Adebanji, said the incident happened when one of the aircraft was on its way to embark on a scheduled flight.
He said the aircraft’s wing brushed that of another plane belonging to the carrier, adding that the situation was adequately handled by the firm’s team.

Adebanji said in a statement,

“Two of our aircraft, Boeing 737-800NG, were this (Tuesday) afternoon involved in a wing-tip brush at the General Aviation Terminal of the Murtala Muhammed Airport, Ikeja, Lagos.

“One of the aircraft, 5N-MJP, was marshalled out of the ramp for a scheduled flight when its wing brushed that of another aircraft, 5N-MJQ, parked on the ramp. There were no incidences as the safety of passengers was not jeopardised. We have grounded the two aircraft and are looking into the incident.”