Home Gossip News We are not investigating Tinubu - Presidency

We are not investigating Tinubu - Presidency 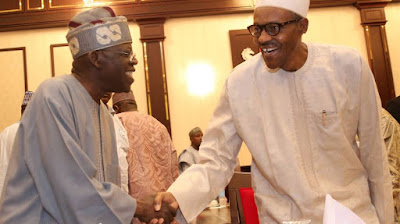 The presidency has strongly denied media reports APC leader,Bola Tinubu is under investigation over alleged plot against Buhari.Read statement by Media and Publicity secretary,Garba Shehu

The attention of the Presidency has been drawn to a false and sensational story by a leading newspaper to the effect that a pillar of the governing party, the APC, Asiwaju Bola Ahmed Tinubu is "under security watch over alleged plot against Buhari.Nigerians are hereby advised to ignore this story because it is false and baseless.We wish to confirm without any equivocation that the Asiwaju is not of any particular interest to any arm of the security services.
The relationship between him and the President can not be better than it is at the moment.According to the perverted logic of the newspaper, the respected leader of the APC is into a plot against the leader of the country.The presidency is unaware of any such plots against the President.I got on the phone a short while ago with General Babagana Munguno, (Rtd), the National Security Adviser..and the Director General of the SSS, Lawal Daura who both dismissed the published reports as acts of pure mischief.

They are not aware of the Asiwaju being on any kind of watch.It would appear that a competition is on between two or three newspaper establishments.on how best to breach the excellent relationship between the pillars of our party and government.So far, they have not made a headway and there is no indication that they will succeed in the future.It suffices to say that such reports, written without fairness and balance can only take away from whatever is left of the credibility of these newspapers. The general public is hereby advised to ignore them on these reports. Thank You!