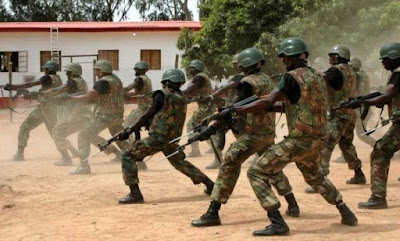 No fewer than 105 soldiers are said to have gone missing after a gun battle with Boko haram sect members at Gudunbali, Borno State, on Wednesday November 18th. According to a report by Premium Times, the soldiers went missing after a fight with the insurgents who tried to capture the community early yesterday morning.

A T-72 tank as well as several artillery weapons from the unit were reportedly carted away by the sect members.

“Gudunbali was attacked this morning and some weapons were captured from the battalion. Two officers and 105 soldiers are still missing. They captured a T-72 tank from the unit and some artillery weapons were also captured. The commanding Officer (CO) of the battalion is yet to be seen but no one has been confirmed dead yet,” a source told PT.The source also added that the sect members carted away a truck loaded with 60,000 rounds of AA ammunition and three artillery pieces. Spokesperson for the Nigerian Army, Sani Usman as well as the spokesperson of the Army’s 7 Division, Tukur Gusau, both declined to comment on the matter, saying that the commander of the division would hold a press conference on the matter today November 19th.