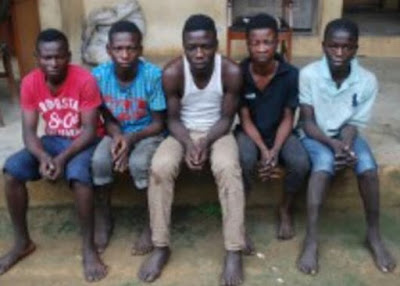 The Lagos state police Rapid Response Squad have arrested five in-traffic robbers who specialized in snatching handsets and bags from unsuspecting members of public in traffic. The suspects identified as Ajala Lateef 16, Salami Sodiq, 15, Raji Kazeem, 19, Bashiru Adeyemi, 19, and Ikechukwu Ukueje, 15, were arrested on Wednesday October 28th after they had successfully robbed their victim of her belongings.

Confirming the arrest, the commander of the RRS, Assistant Commissioner of Police , ACP Olatunji Disu, said that the policemen arrested the suspects during a special raid

"The Police would not leave any stone unturned in fighting crime in the state. We will continue to work round the clock to make Lagos a haven for those with legitimate businesses. The commander said that the police has been charged by the Governor, Mr. Akinwunmi Ambode and Commissioner of Police, CP Fatai Owoseni, to rid the state of all forms of crime".

He implored Lagosians to assist the police by supplying information that would help theme to curb crime and track down criminals. One of the suspects who confessed to the crime, Ajala Lateef, a secondary school dropout from Isale-Eko, said their ring leader, Taiye, still at large, pretended as a passenger and snatched Mrs. Okechukwu’s bag and mobile phone while she was boarding a bus.

"I know Taiye very well, he sleeps in Oko-Mola at Oshodi Under Bridge. I have seen him in different occasions dispossessing passers-by in Oshodi of their bags, phones and other belongings. Most times, we pretended as passengers to rob people," he said

During the raid operation of black spots, no fewer than 37 social miscreants were amongst the suspects arrested