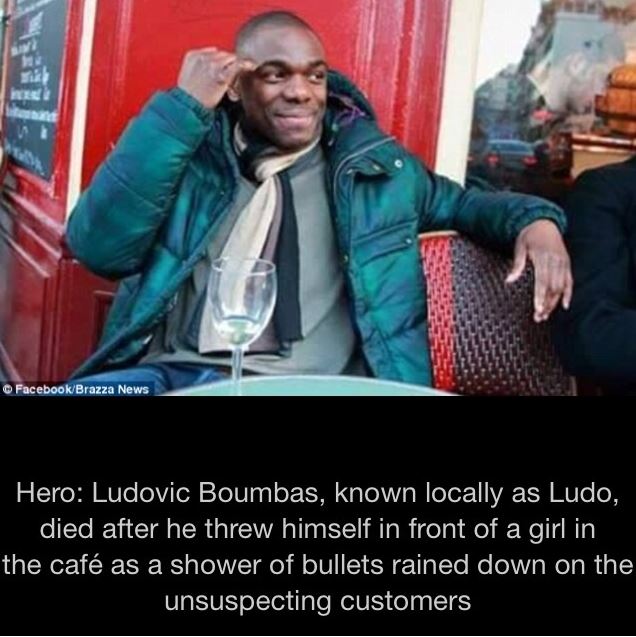 A woman who survived the Paris massacre thanks to the hero of La Belle Equipe café who turned himself into a human shield and took a bullet for her is in hospital so traumatised she keeps repeating her saviour’s name.

Chloe Clement was inside the café celebrating a friend’s 35th birthday when it was struck by a hail of bullets during Friday night’s carnage.

The happy occasion became a nightmare when two gunmen opened fire and her friends and colleagues began falling dead around her.

As a bullet whizzed towards Chloe, frozen in her horror, her friend Ludo Boumbas threw himself in between her and the gunman.

Ludo sacrificed himself, but Chloe survived the deadly assault with a bullet wound to the arm.

She now lies in a hospital bed, remembering her many friends and colleagues who died during the birthday celebrations.

‘She was on morphine and was in shock. She would barely speak,’ said the manager of Café des Anges, 27-year-old Virgile Grunberg, who went to visit Chloe in hospital.

‘She felt guilty because Ludovic died for her. She just kept repeating his name again and again.’

Ludo’s family have hailed his selfless bravery and called him ‘a hero’.

An unnamed friend told MailOnline: ‘Ludo threw himself forward to protect a girl and took the bullet.

‘She was also shot, but she survived and is in hospital.

‘He loved travelling the world and above all he loved people. He was just one of life’s good, good people. He didn’t stand a chance.’

Fedex worker Ludo was also at the birthday party of waitress Houda Saadi when gunmen dressed in bullet proof vests moved in.

The majority of the 19 victims at the café were from the birthday celebrations.

Five members of staff from a cafe called the ‘Café of Angels’, were wiped out in the tragedy together with six of their friends.

Their brothers Khaled and Bashir tried to save the women as they died on the floor in their arms.