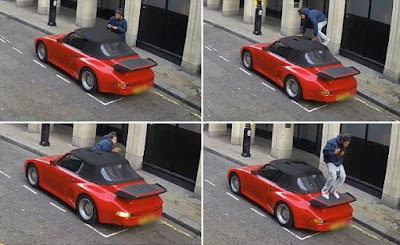 Detectives have released CCTV of the suspect seen in broad daylight using a knife to cut his way in to the red sportscar in Mayfair, London, before climbing in. The man, who is black and believed to be in his twenties, is shown trying to steal the car but fails before climbing back out of the Porsche and jumping off its spoiler.
Despite the Porsche's alarm blaring and its lights flashing a number of pedestrians walked past without confronting the man. The attempted car theft took place at 7.45am on Tuesday, September 29, in Mill Street, Mayfair.