Driver Fakes own Death to Evade Fine in Calabar [PHOTO] 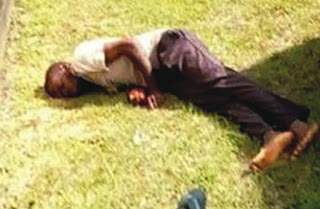 A taxi driver, whose name could not be immediately ascertained, on Friday faked his own death in Calabar, the Cross River State capital, in order to evade paying fine.

The incident happened at the Marian Road office of the Cross River State Commercial Transport Regulatory Agency, where many commercial vehicles were impounded for various offences.

Southern City News learnt the taxi driver had faked his own death to avoid paying penalty for violating CTRA order.

many passers-by. One of the eyewitnesses, who is a commercial cab driver, Mr. Nichola Eyo, said the driver was a trickster. Eyo said:

“He is fond of this act; each time he is caught after violating traffic rule, he puts on such trick. The other time, he removed all his clothes and lay flat on the road when he was caught for violating traffic offence by men of the Federal Road Safety Corps along this same Marian Road.”

The driver caused a gridlock along the road according to another eyewitness, who identified himself as Adamu Benny.

He said, “Though the environment was tense with crowd of onlookers watching to see what becomes of the man. Besides, many cars were waiting to enter while others tried getting out of the premises and this caused a gridlock.”