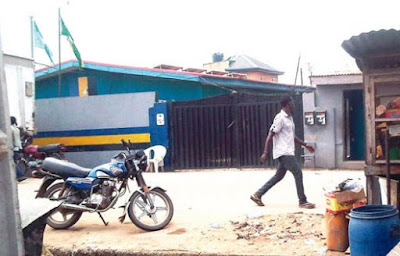 A female sergeant, Obotie Adesuwa, is currently in the cell of the X-Squad Section of the Lagos State Police Command, after she allegedly sold a week-old baby boy who had been brought with his mother to a police station.

Punch learnt that Adesuwa, who hails from Edo State, is attached to the Akinpelu Police Division, where the baby boy and her mother, Toyin, who is said to be mentally unstable, had also been brought to by a Good Samaritan.

They were reportedly brought to the police in the last week of September. It was learnt that Adesuwa, who was on duty, had received the baby.It was gathered that the Good Samaritan, who was taking care of the baby’s mother, had brought Toyin and her child to the station after Toyin was delivered of the baby in a psychiatric hospital.

PUNCH Metro gathered that there was, however, trouble at the Akinpelu division on Monday, November 9, when Toyin showed up at the station to ask for her baby, but the sergeant allegedly denied knowing the woman.

It was learnt that the matter had caused an altercation during which the Divisional Police Officer invited the mother and the sergeant and interrogated them. The sergeant was said to have confessed to the DPO that she collected the baby but had sold him.

A police source told our correspondents that Adesuwa allegedly took the baby to her village in Edo State, and later sold him to a family in Port Harcourt, Rivers State.

Our correspondents learnt that Adesuwa, who allegedly failed to record the incident in the crime diary of the police station on the fateful evening, was then arrested and taken to the Area F command, Ikeja, from where she was later transferred to the X-Squad Section. The source said,
“The incident happened at the Akinpelu Police Division. The sergeant received the report of a mentally deranged woman and her newborn baby. But on the same evening, she was said to have arranged for the woman and the baby to be put inside a car and driven away by unknown persons.
“At a junction, the baby’s mother was given N500 and asked to alight. The car drove away with the baby. It was on Monday, November 9, that the mother unbelievably showed up at the station to ask for her baby. The sergeant initially denied ever meeting her.

“The DPO was later informed, and took all of them to the Area Commander, and then the female sergeant was arrested. The baby has now been recovered.”
Another source, who claimed to have spoken with Adesuwa after her arrest, added that the sergeant gave the baby to one of her relatives in Edo State to sell to a couple in Port Harcourt at an undisclosed amount.

She explained that the baby was later rescued through the help of policemen while the buyer was also arrested. She said,

“The mother of the baby came to ask after him about two months after and that was when the bubble burst. When Adesuwa denied ever knowing her, the baby’s mother was enraged and went to report to the DPO.

“The DPO then ordered that Adesuwa be detained.That was when she confessed to the DPO that the baby had been taken to her village, and later sold in Port Harcourt. The suspect, was however, able to help in recovering the baby.

“The woman, who helped her to carry the baby to Port Harcourt, has also been arrested. She (Adesuwa) told us, her police friends, that it was the devil that pushed her to commit the crime.”
Our correspondents gathered that Toyin had also showed up at the X-Squad Section and was assisting the police with investigation.

Efforts to reach the baby’s mother for comment, were, however, not successful as of press time.
The Lagos State Police Public Relatisons Officer, DSP Joe Offor, confirmed Adesuwa’s arrest, adding that investigation was ongoing.

He said, “The sergeant was arrested in connection with a stolen baby boy. Investigation is ongoing.”