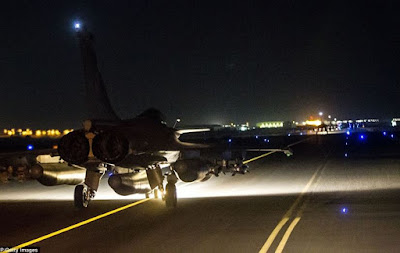 Following the Paris Attcks which left 128 dead and hundreds injured, French fighter jets have carried out a series of 'massive' air strikes on Raqqa, destroying a key ISIS command centre and training camp in Syria. According to s statement by the defence ministry said.

'The raid ... including 10 fighter jets, was launched simultaneously from the United Arab Emirates and Jordan. Twenty bombs were dropped,'. The French jets took off from air bases in Jordan and the United Arab Emirates and using intelligence from U.S. forces, the jets bombed a command centre, recruitment centre for jihadists, a munitions depot and a training camp for fighters, it said.
While,activists inside Syria have suggested that no civilian casualties have been sustained in the Raqqa bombings,water supplies and electricity have reportedly been cut as a result of the air strikes, with activists claiming there has been 'panic' inside the city.